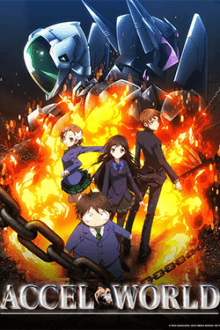 Haruyuki "Haru" Arita is a short, overweight boy who is frequently ridiculed by delinquents at the Umesato Junior High School. Using his Neuro Linker to escape the torment of real life, he logs onto the school's Local Network cyberspace where he always plays virtual squash alone, and his innate video game skills bring him to the attention of Kuroyukihime (literally meaning "Black Snow Princess"), the school's popular, highly intellectual and attractive female Student Council Vice-President. After helping him against the delinquents, Kuroyukihime introduces Haruyuki to Brain Burst, a secret program that is able to accelerate the human cognitive process to the point at which time appears to stop. Haruyuki soon learns that Brain Burst is more than just a program, but an Augmented Reality Massively Multiplayer Online (ARMMO) Fighting Game where people fight each other in fierce duels in order to obtain Burst Points which can be spent for acceleration abilities in the real world.